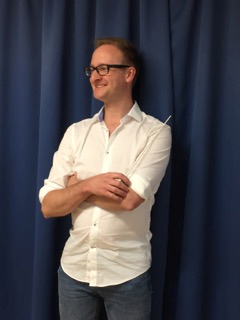 Tim began conducting in his teens and went on to read Music and French at the University of Exeter. He studied violin with Mary Eade, composition with Joe Duddell and specialised in musical direction with Ian Mitchell.  Subsequent to his graduation with a double first-class degree, he has conducted a  wide variety of vocal and instrumental ensembles.

Tim particularly enjoys working with ensembles of varying degrees of experience and is a firm believer that classical music should be made as accessible as possible to both performers and the wider audience. In addition to the Dartmouth Orchestra, Tim is currently Musical Director of the Exeter University Symphony Orchestra , Dunsford Singers, Chagford Singers, Orchestra+ (the South West’s first LGBT symphony orchestra) and EX4 Chamber Orchestra, which he founded in August 2015.  Tim was recently invited to guest conduct the Mid-Somerset Orchestra for the first half of its 2017-18 season.